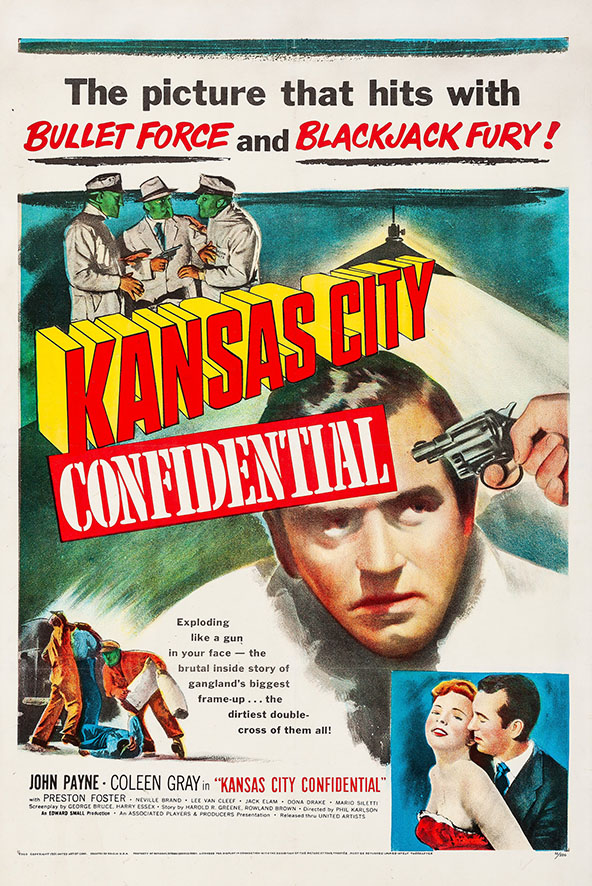 Film Noir presents Kansas City Confidential though produced under the Hays Code censorship regulations, the film is constituted as one of the most brutal and violent crime pictures made up through that time; as such, it retains a historical significance in film.

This classic opens on a Kansas City armored-car robbery perpetrated by cynical, corrupt ex-policeman Timothy Foster (Preston S. Foster). Foster devises an outrageous scheme: he will recruit three of the most vicious and unrelenting criminals he can find (screen heavies Lee Van Cleef, Jack Elam and Neville Brand) to undertake a robbery, blackmailing them into the heist with incriminating evidence from other “jobs.” As an eccentric and clever conceit, Foster forces each of the perpetrators to wear masks, thus concealing their identities from one another and preventing the old pitfall of the men squealing and backstabbing. The heist comes off without a scratch, but a complication arises when the ignorant cops pick up an unrelated fellow, Joe Rolfe (John Payne) for his ownership of a van similar to the one used in the caper. In time, Rolfe is cleared, but he grows irate over the accusations and sets off to find Foster and co. and teach them a lesson. He finally happens upon one of the perpetrators in Mexico, beats him nearly to death, and assumes the victim’s identity – and that’s when things really get complicated.